Yesterday evening members of the bench and bar, academics, and friends of Canadian Legal History gathered at Osgoode Hall in Toronto to thank Roy McMurtry, founder and long time president of the Osgoode Society on the occasion of his retirement from the presidency. 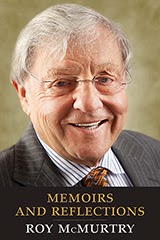 Roy has been honoured many times before, as is fitting given his many contributions to Canadian society through law and politics. But as editor-in-chief Jim Phillips remarked in his address, Roy's initiative in establishing the society, and his efforts in securing its success, including hiring the late Professor Peter Oliver as first editor in chief, attracting support from the bar, the Law Society of Upper Canada and the Law Foundation of Ontario, as well as authoring one of our books, are far from least of these contributions. (You can read about the founding of the society in Roy's Memoirs and Reflections, published in 2013.) The Society could not have reached its current state of excellence (100 books and counting) without him.

Thankfully, Roy will continue to be involved with the society as past president.