I didn't know about this museum, either. But the exhibit looks like a  superlative example of public history with a law bent.

Charles Paul Hoffman, a doctoral student at the Faculty of Law, McGill University, has posted a working paper "The 1925 Reform of the Legislative Council of Nova Scotia: Implications for Canadian Senate Reform?" on SSRN. The paper was originally presented to the mid-winter meeting of the CLSA in 2012.

Senate Reform was a thing in 2012; it is much more of a thing now, so this is timely indeed. Serendipitous or strategic? Enviable either way.

This paper explores the short-lived 1925 reforms to the Legislative Council of Nova Scotia, the former upper house of the provincial legislature, including why prior reform efforts had not succeeded, what made 1925 different, and what lessons the Nova Scotia reforms might have for ongoing efforts to reform the Canadian Senate.
Posted by Mary Stokes at 6:09 PM 1 comment: 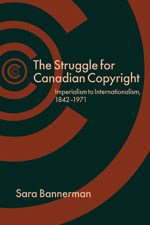 First signed in 1886, the Berne Convention for the
Protection of Literary and Artistic Works is still
the cornerstone of international copyright law.
Set against the backdrop of Canada’s development
from a British colony into a middle power, this
book reveals the deep roots of conflict in the
international copyright system and argues
that Canada’s signing of the convention can be
viewed in the context of a former British colony’s
efforts to find a place on the world stage. In this
groundbreaking book, Sara Bannerman examines
Canada’s struggle for copyright sovereignty and
explores some of the problems rooted in imperial
and international copyright that affect Canadians
to this day
Posted by Mary Stokes at 1:05 PM No comments: 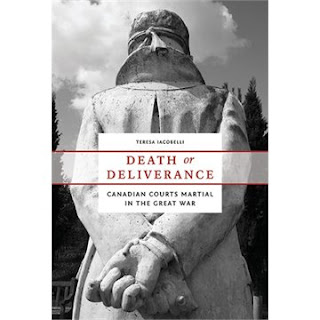 
Soldiers found guilty of desertion or cowardice
during the Great War faced death by firing
squad. Social memory of this brutal system of
frontline justice inspired the pardon movements
of the 1990s, which sought redemption for
soldiers executed on the battlefield. Iacobelli
looks beyond stories of callous generals and
quick executions to consider the trials of nearly
two hundred soldiers sentenced to death but
spared by a disciplinary system capable of
thoughtful review and compassion. Published on
the centennial anniversary of the war’s outbreak,
Death or Deliverance reconsiders an important
chapter in the history of both a war and a nation.
Posted by Mary Stokes at 12:50 PM No comments:


FACING EUGENICS: REPRODUCTION, STERILIZATION, AND THE POLITICS OF CHOICE

Facing Eugenics is a social history of sexual sterilization operations in twentieth-century Canada. Looking at real-life experiences of men and women who, either coercively or voluntarily, participated in the largest legal eugenics program in Canada, it considers the impact of successive legal policies and medical practices on shaping our understanding of contemporary reproductive rights. The book also provides deep insights into the broader implications of medical experimentation, institutionalization, and health care in North America.
Erika Dyck uses a range of historical evidence, including medical files, court testimony, and personal records to place mental health and intelligence at the centre of discussions regarding reproductive fitness. Examining acts of resistance alongside heavy-handed decisions to sterilize people considered “unfit,” Facing Eugenics illuminates how reproductive rights fit into a broader discussion of what constitutes civil liberties, modern feminism, and contemporary psychiatric survivor and disability activism.
Posted by Mary Stokes at 11:36 AM No comments:

The 2012 Osgoode Society members' book, R. Blake Brown's Arming and Disarming: A History of Gun Control in Canada, has been awarded the 2013 Canadian Law and Society Association Book Prize. Congratulations to Professor Brown. This is the fourth time that an Osgoode Society book has won this award, so congratulations to the society too!
Posted by Mary Stokes at 12:31 PM No comments:

The Osgoode Society Annual General Meeting was held yesterday at Osgoode Hall. A large number of members and guests were on hand to hear editor-in-chief Jim Phillips report on the society's operations, approve minutes and the financial report, to hear society president R.Roy McMurtry's fascinating remarks on his soon to be published memoirs (this year's Osgoode Society members' book), and to congratulate this year's prize winners.

Three awards were presented: the Peter Oliver Prize for best published student work in the previous year, the R. Roy McMurtry Fellowship for graduate students or junior scholars researching important subjects in legal history, and the Jack Saywell Prize for the best book on constitutional legal history published in the last two years.

The winners are as follows:

There were also co-winners of the McMurtry Fellowship--Joseph Dunlop, currently a post-doc at Emmanuel College, University of Toronto, and Ed Cavanagh, a doctoral student at the University of Ottawa.

The Saywell Prize was awarded to Dr. Michael Cross, professor emeritus of history at Dalhousie University, for his biography of Robert Baldwin, "The Morning Star of Memory," published in 2012 by Oxford University Press.

Our congratulations to all winners!
Posted by Mary Stokes at 12:26 PM No comments: