CFP: Does Law's History Matter? The Politics of our Disciplinary Practices


Thanks to Shaunnagh Dorsett for sending this on.

CFP: Annual Conference of the Australian and New Zealand Law and History Society

This year’s conference will be held in Melbourne, Australia, 11-14 December 2019. The theme is ‘Does Law’s History Matter? The Politics of our Disciplinary Practices’
Deadline for abstracts (individual or panel) and on the conference theme or any other topic is 21 July 2019. More information on the theme and submission of abstracts can be found on the conference website: https://www.deakin.edu.au/about-deakin/events/2019-anzlhs-conference.

The keynote speakers are:

(Canadians, please note that there will be a Wes Pue event on the 13th.)

Posted by Mary Stokes at 9:00 AM No comments:

Congratulations to Osgoode Society Director Mahmud Jamal on his appointment to the Ontario Court of Appeal!

Mahmud Jamal, Partner at Osler, Hoskin & Harcourt LLP in Toronto, is appointed a Justice of Appeal of the Court of Appeal for Ontario. Mr. Justice Jamal replaces Madam Justice G. Pardu, who elected to become a supernumerary judge effective January 1, 2019.
Justice Jamal was born in Kenya, raised in England, and completed high school in Edmonton. He received a B.A. from the University of Toronto, LL.B. and B.C.L. degrees from the Faculty of Law, McGill University, and an LL.M. from Yale Law School, which he attended on a Fulbright Scholarship. He served as law clerk to Justice Melvin Rothman of the Quebec Court of Appeal and Justice Charles Gonthier of the Supreme Court of Canada.
Justice Jamal, who is bilingual, practised with Osler, Hoskin & Harcourt LLP in the fields of appellate litigation, constitutional and public law, class actions, and commercial litigation. He appeared before the Supreme Court of Canada in 35 appeals addressing a wide range of civil, constitutional, criminal, and regulatory issues. He also appeared before various provincial courts, the Federal Court, Federal Court of Appeal, and Tax Court of Canada, and federal and provincial administrative tribunals.
Justice Jamal was a director of the Canadian Civil Liberties Association, The Advocates’ Society, and the Osgoode Society for Canadian Legal History. He was a member of the Supreme Court Advocacy Institute and a trustee of the Canadian Business Law Journal. He has taught constitutional law at McGill, administrative law at Osgoode Hall, and published widely in his areas of practice. He was also chair of Osler’s pro bono program and a member of its Partnership Board.
He and his wife, Goleta, are the proud parents of two teenagers.
Posted by Mary Stokes at 3:19 PM No comments:

Kelm and Smith, Talking back to the Indian Act: Critical Readings in Settler Colonial Histories


In honour of Indigenous Peoples' Day today (June 21) the U of T press has compiled a list of relevant publications from their catalog.

On the legal history front, they highlight Mary-Ellen Kelm and Keith D. Smith, Talking back to the Indian Act: Critical Readings in Settler Colonial Histories published in 2018, available in paperback and e-book formats. Here's the blurb:

Talking Back to the Indian Act is a comprehensive "how-to" guide for engaging with primary source documents. The intent of the book is to encourage readers to develop the skills necessary to converse with primary sources in more refined and profound ways. As a piece of legislation that is central to Canada’s relationship with Indigenous peoples and communities, and one that has undergone many amendments, the Indian Act is uniquely positioned to act as a vehicle for this kind of focused reading.
Through an analysis of thirty-five sources pertaining to the Indian Act—addressing governance, gender, enfranchisement, and land—the authors provide readers with a much better understanding of this pivotal piece of legislation, as well as insight into the dynamics involved in its creation and maintenance.
Posted by Mary Stokes at 11:06 AM No comments:

Campbell and Exner, "An Elusive Remedy: A Calgary Chiropodist Complains of Libel, 1916" on SSRN

Lyndsay Campbell and Heidi J. T. Exner have posted "An Elusive Remedy: A Calgary Chiropodist Complains of Libel, 1916" on SSRN. The article is forthcoming in the Law & History Review.

The decision of a chiropodist - a man who called himself 'Doctor' and developed and sold foot products - to prosecute a small Calgary newspaper for criminal libel in the summer of 1916 touched off a series of events that ultimately resulted in the chiropodist's convictions for holding himself out as a doctor and practising medicine without a licence. The proceedings against the editor were stayed. These legal proceedings demonstrate the mutually reinforcing commitments of doctors and lawyers to protecting the professionalisation of medicine, and especially orthopaedic surgery, against the threat of interlopers in early twentieth-century Canada.
Posted by Mary Stokes at 3:41 PM No comments:

Hutchison, "The Patriation of Canadian Corporate Law" on SSRN


Camden Hutchison of Allard Law, UBC, has posted "The Patriation of Canadian Corporate Law" SSRN. The article is forthcoming in the U of T Law Journal.

Canadian corporate law belongs within a broader Anglo-American legal tradition, sharing many of the features of other common law jurisdictions, most notably England and the United States. Prior to Confederation, Canadian corporate law first emerged from nineteenth-century English legislation and continued to resemble English law--at least superficially--well into the twentieth century. In the 1970s, Canadian corporate law moved closer to the United States, as major legislative reforms, including the Canada Business Corporations Act, were significantly influenced by American statutes. From a legislative perspective, Canada has clearly been influenced by developments from beyond its borders.Legislation is only one source of corporate law, however. Just as important is the creation of legal rules through the common law adjudicatory process. Thus, examining case law raises an important empirical question distinct from, though relevant to, the issue of legislative influence--namely, what have been the major influences on Canadian judicial lawmaking? This article addresses this question through a comprehensive citation analysis of substantially all corporate law decisions by Canadian courts of appeal since 1867. The primary findings are as follows: (1) Over the past 150 years, Canadian corporate law--once dominated by English precedent--has become increasingly characterized by domestic Canadian precedent; (2) Historically, the Judicial Committee of the Privy Council played an important role in maintaining English influence, such that the prominence of English precedent decreased after 1949; and (3) Despite the increasing influence of Canadian precedent throughout the Canadian legal system, Canadian courts continue to cite English cases when addressing unsettled legal issues, preserving a channel for the continuing influence of English jurisprudence in Canada. Surprisingly, Canadian judicial decisions rarely cite American cases, challenging the notion that Canadian courts have been significantly influenced by American law. Ultimately--and despite residual English influence--Canadian corporate law has formed its own distinct identity.
Posted by Mary Stokes at 10:48 AM No comments:

New from MQUP: Tracings of Gerald Le Dain's life in the Law ed. Baker and Janda

The life and work of a leading Canadian legal academic, university administrator, law reformer, and judge.

Gerald Le Dain (1924-2007) was appointed to the Supreme Court of Canada in 1984. This collectively written biography traces fifty years of his steady, creative, and conciliatory involvement with military service, the legal academy, legislative reform, university administration, and judicial decision-making. This book assembles contributions from the in-house historian of the law firm where Le Dain first practised, from students and colleagues in the law schools where he taught, from a research associate in his Commission of Inquiry into the non-medical use of drugs, from two of his successors on the Federal Court of Appeal, and from three judicial clerks to Le Dain at the Supreme Court of Canada. Also reproduced here is a transcript of a recent CBC documentary about his 1988 forced resignation from the Supreme Court following a short-term depressive illness, with commentary from Le Dain’s family and co-workers.Gerald Le Dain was a tireless worker and a highly respected judge. In a series of essays that cover the different periods and dimensions of his career, Tracings of Gerald Le Dain’s Life in the Law is an important and compassionate account of one man's commitment to the law in Canada.Contributors include Harry W. Arthurs, G. Blaine Baker, Bonnie Brown, Rosemary Cairns-Way, John M. Evans, Melvyn Green, Bernard J. Hibbitts, Peter W. Hogg, Richard A. Janda, C. Ian Kyer, Andree Lajoie, Gerald E. Le Dain, Allen M. Linden, Roderick A. Macdonald, Louise Rolland, and Stephen A. Scott.

Posted by Mary Stokes at 3:09 PM No comments:

For winning an honourable mention for the W. Wesley Pue prize for best book on a social legal subject for A History of Law in Canada vol 1: Beginnings to 1866, published by the Osgoode Society and U of T press in 2018!
Update: The citation says: "A History of Law in Canada, Volume One is a monumental and masterful work. It fills a gap in Canadian scholarship by providing a comprehensive, well-written and informative account of the history of law in Canada. Its 900 pages of text and footnotes reflect an astonishing range of knowledge. It breaks new ground in its sweep and scale, and its interweaving of the history of the three pillars of Canadian law: common law, civil law and Indigenous legal orders. It will be a classic for many years, a guide and inspiration to Canadian legal historians for generations to come." 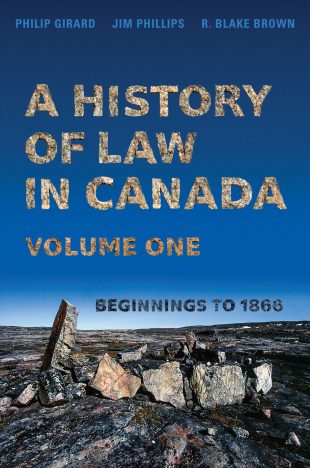 Posted by Mary Stokes at 4:06 PM No comments: