Eric Adams is a legal historian and constitutional scholar at the University of Alberta Faculty of Law.

For those who do not follow Christopher Moore's History News blog (shame on you!) and those who would miss this post because he's not on twitter (shame on him!) here's his post on the re-enactment of the Lazier murder trial of 1884, with Robert J. Sharpe of the Ontario Court of Appeal and author of the book on which the re-enactment is based in the role of Judge Patterson.

Click here for Chris's post Cool History: The Lazier murder trial to be reenacted
Posted by Mary Stokes at 10:21 AM No comments:

(via H-Canada)
Posted by Mary Stokes at 8:06 AM No comments:

The first of the Osgoode Society's four publications for 2014 has just arrived in my mailbox. 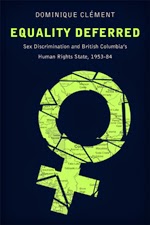 A co-publication with UBC Press, and part of the Law and Society series, Equality Deferred : Sex Discrimination and British Columbia's Human Rights State, 1953-84 by Dominique Clément

traces the history of sex discrimination in Canadian law and the origins of human rights legislation, demonstrating how governments inhibit the application of their own laws, and how it falls to social movements to create, promote, and enforce these laws.


Focusing on British Columbia -- the first jurisdiction to prohibit discrimination on the basis of sex -- Clément documents a variety of absurd, almost unbelievable, acts of discrimination. The province was at the forefront of the women's movement, which produced the country's first rape crisis centres, first feminist newspaper, and first battered women's shelters. And yet nowhere else in the country was human rights law more contested. For an entire generation, the province's two dominant political parties fought to impose their respective vision of the human rights state. This history of human rights law, based on previously undisclosed records of British Columbia's human rights commission, begins with the province’s first equal pay legislation in 1953 and ends with the collapse of the country's most progressive human rights legal regime in 1984. This book is not only a testament to the revolutionary impact of human rights on Canadian law but also a reminder that it takes more than laws to effect transformative social change.

Here's the table of contents:

And some comments by reviewers:

"Curious about the origins of our human rights protections? This marvelous book presents fascinating insights. It romps through stories of the courageous individuals who claimed those human rights. It profiles the discriminators in all their egregious glory. And it probes the underbelly of the Canadian state that mediated between the two. Dominique Clément is by turns brilliant, challenging, and inspiring. Read this and ponder our history ... and our future." -- Constance Backhouse holds the positions of Distinguished University Professor and University Research Chair at the Faculty of Law, University of Ottawa

"Dominique Clément's book is timely. The purpose and value of human rights are being challenged in the press and even in parliament. If we are to avoid an extended era of human rights retrenchment, it is important to learn what has been accomplished and how human rights codes and commissions have affected our lives."  -- James W. St. G. Walker is a professor in the Department of History at the University of Waterloo

"Dominique Clément has written a balanced account of the importance of human rights codes in promoting ideals of fairness and tolerance in Canada, and the simultaneous failure of human rights litigation (and education) to dismantle systemic discrimination. This book will be essential reading not only for human rights scholars but also for all those interested in equity and the promotion of social justice." -- Lori Chambers is a professor in the Department of Women's Studies at Lakehead University

If you did not order the book through the Osgoode Society, here's how to order:

In Canada, order your copy of Equality Deferred from UTP Distribution at:


Ordering information for customers outside Canada
Posted by Mary Stokes at 4:00 PM No comments:

Fyson on Law, Justice and State Formation in colonial Quebec, 1760-1867

Don Fyson of the Université Laval has published "Between the Ancien Régime and Liberal Modernity: Law, Justice and State Formation in colonial Quebec, 1760-1867" in the May issue of History Compass.


This article surveys the historiography of state formation in colonial Quebec, from the British Conquest of 1759/1760 to Canadian Confederation in 1867, focussing on law and justice. It is structured around three key themes: the Conquest as a point of rupture, with the imposition of a British colonial state and English law on top of a largely French-origin society; the nature of the ancien-régime state over the 80 years that followed; and the historiographical debate over the creation of a new liberal order in Canada and Quebec from the 1840s onwards. The article ends with a discussion of six factors, both local and transnational, which help account for legal change and state formation in Quebec in the period.

Posted by Mary Stokes at 9:20 AM No comments:

Huskins, "Who Owns the Church Buildings? Writing the History of Canadian Anglican Schisms"

In the Journal of Canadian Church Historical Society, Archdeacon Harry Huskins addresses some religious and social conflicts of Canadian Anglican Churches in the context of canon law and real property litigation:

The article discusses parish controversies regarding the ownership of church buildings after schisms in Canada's Anglican Church, focusing on the 1874-1875 Cridge Controversy in Victoria, British Columbia, between Bishop George Hills and cathedral dean Edward Cridge. Topics include Anglican canon law precedents from the Canons of 1603, the history of church disputes before the Canadian Supreme Court, and the 2010 court case "Bentley v. Anglican Synod of the Diocese of New Westminster."
Posted by Mary Stokes at 1:53 PM No comments: