Via Dan Ernst at the Legal History Blog.

Founding moments sometimes endow certain elements in society—such as revolutionary parties or political leaders—with political legitimacy. A key line of inquiry therefore concerns the relationship between founding moments and “founding figures,” and the extent to which the future of a nation should be guided by the intentions of those who orchestrated these founding moments.

We might also consider the phenomenon of unfinished foundings, which occur when revolutionary groups overthrow a dictator but not the entire “old guard.” To what extent is an event a founding moment if it is a partial or an unfinished revolution? How do such unfinished foundations influence the identity of the country?

Alexander Herzen described revolutions and national foundings as “pregnant widows”:
The death of contemporary forms of social organization should gladden rather than oppress the soul. But what’s frightening is that the departing world leaves not an heir but a pregnant widow. Between the death of one and the birth of the other much time will go by, a long night of chaos and desolation will have to pass.

Some though not all founding moments occur at tumultuous times in a country’s history. They are bloody revolutions, fierce anti-colonial struggles and decades-long political upheavals. Countries undergoing founding moments—“pregnant widows” in Herzens words—should not be studied only as historical events but also as modern realities that influence and indeed often drive our understanding of law. From Egypt, Libya, Iraq to Nepal, countries around the world are undergoing the birth pangs of founding, constitution and reconstitution—they are waging civil wars, mounting revolutions and writing constitutions.

This conference on founding moments in constitutionalism is an opportunity to address this phenomenon and how it relates to our understanding of law.

Eligibility
Submissions are invited from scholars of all ranks, including doctoral students.

Submission Instructions
Interested scholars should email biographical information and an abstract of no more than 500 words by Monday, December 21, 2015 to Nishchal Basnyat (nishchal.basnyat@yale.edu) on the understanding that the abstract will form the basis of the pre-Symposium working draft of a minimum of 3000 words to be submitted by Monday, March 30, 2016. Scholars should identify their submission with the following subject line: “Yale Law School—Abstract Submission—Founding Moments.”

Notification
Successful applicants will be notified no later than January 15, 2016.

Costs
There are no costs to participate in this Symposium. Successful applicants are responsible for securing their own funding for travel.  Arrangements will be made for a special rate at a local hotel.

Canadian Journal of Law and Society: call for proposals for special issue

Legal historians take note--wouldn't it be great to have a legal history special issue?


Canadian Journal of Law and Society Revue Canadienne Droit et Société VOLUME 32 (2017) DUE DECEMBER 1, 2015 The  Editorial  Board  of  CJLS/RCDS  is  seeking  proposals  for  the  2017  special edition of the Journal (Volume 32.2) for publication in the summer of 2017.  CJLS/RCDS  is  an  interdisciplinary,  peer­ reviewed journal  which  produces  research dealing with law and its social and cultural context.
The annual thematic special issue, curated by guest editors, is selected by the Editorial Board in February 2016. Each issue explores its theme across a range  of genres, with scholarly essays and articles.
Proposals by potential guest editors should comply with CJLS/RCDS Submission  Guidelines  and Special  Issue Guidelines  aimed at assisting  those  interested  in  submitting  manuscripts  to  CJLS/RCDS.  Both  Guidelines  can  be  found  at  http://journals.cambridge.org/action/displayMoreInfo?jid=CLS&type=ifc   Proposals should be emailed to cjls_rcds@carleton.ca by December 1, 2015.
For  further information on the Journal, including the role of guest editors, and general  information on the publication process, and the journal  style guide, please  visit  the website http://journals.cambridge.org/action/displayJournal?jid=CLS If  you  have  any  questions  or  concerns,  please  do  not  hesitate  to  contact  the  Managing Editor, Dr. Dale Spencer.  Professor Dale Spencer  Managing Editor CJLS/RCDS  Department of Law and Legal Studies Carleton University 1125 Colonel By Drive Ottawa, ON K1S 5B6 Canada Email: dale.spencer@carleton.ca
Posted by Mary Stokes at 1:58 PM No comments:

Philip Girard elected to board of ASLH

Philip Girard of Osgoode Hall Law School (and Associate Editor of the Osgoode Society) was elected to the board of the American Society for Legal History at the annual meeting of the society recently held in Washington. Philip will serve for a three year term.

Congratulations Philip!
Posted by Mary Stokes at 9:52 PM No comments:


A reception was held at Osgoode Hall in Toronto this evening to launch the Society's four publications for 2015. Remember, the member's book comes free with your membership. This year's member's book is Security, Dissent and the Limits of Toleration in War and Peace: Canadian State Trials Volume IV, 1914-1939 (details below.) All of our books make great presents for the legally, historically or legal-historically minded people on your list. Many of our back titles are also available for purchase.

By Dale Gibson, Emeritus Professor of Law, University of Manitoba.
The General Quarterly Court of Assiniboia can justly be called the first ‘British’ court in western Canada. Although there were predecessor institutions and judicial arrangements for hearing criminal and civil cases, the establishment of the Quarterly Court in the 1830s put the administration of justice in the Red River region on a firm and regularised footing.
Professor Gibson’s comprehensive history of the Court weaves together the legal history of Red River with its social, economic, and political history. At the centre piece of this book sits the complete court proceedings of the General Quarterly Court from 1844 until 1872, which are examined in detail and in context to provide a compelling narrative of the administration of substantial rather than formal justice in a Company community.

by Ian Kyer, Independent Historian. Published by Irwin Law.
The thirty year franchise granted by the City of Toronto to the privately owned Toronto Railway Company in 1891 brought the City a modern electric streetcar system.  But the city and its private sector transit provider never learned to work together.   Their relationship was marred by almost constant conflict and confrontation that resulted in numerous court battles.  Fourteen times these court battles ended up at the Judicial Committee of the Privy Council.  This book details these legal disputes, and will be of interest not only to legal historians but also to those interested in transit and municipal history.
Edited by Barry Wright, Department of Law, Carleton University, Eric Tucker, Osgoode Hall Law School, andSusan Binnie, Independent Historian, published by the University of Toronto Press. 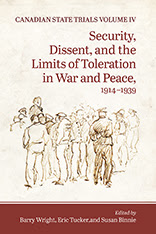 This latest collection in our State Trials series, the fourth, looks at the legal issues raised by the repression of dissent from the outset of World War One through the 1930s and the Great Depression. Topics covered include enemy aliens, conscription and courts-martial in World War I, the trials following the Winnipeg General Strike, sedition laws and prosecutions generally and their application to labour radicals in particular, the 1931 trial of the Communist Party leaders, and the religious-political dissent of the Doukhobors. All regions of the country are covered, and special attention given in one essay to Quebec’s repression of radicalism.
The volume focusses attention on older manifestations of contemporary dilemmas: what are the acceptable limits of dissent in a democracy, and what limits should be placed on state responses to perceived challenges to its authority. 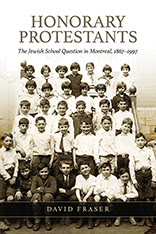 Posted by Mary Stokes at 6:13 PM No comments:

New from MQUP: The Constitutions that Shaped Us

The Constitutions that Shaped Us re-examines from a comparative and critical standpoint the events, key players, and texts which, taken together, help to interpret all Canadian constitutions prior to Confederation. The key constitutional documents that are studied in this book are the Royal Proclamation of 1763, the Quebec Act of 1774, the Constitutional Act of 1791, and the 1840 Act of Union. Great Canadian historians of the past take turns in providing unforgettable sketches and understandings of the actions of monumental figures such as Governors Murray, Carleton, and Elgin, British politicians from Pitt to Burke, Grey, and Durham, without forgetting the leading political and intellectual colonial figures such as Bédard, Papineau, La Fontaine, Mackenzie, and Baldwin.

Gathering together the most renowned and representative works of constitutional scholarship, this anthology provides readers with an in-depth account of the events that would ultimately lead to the union of British colonies, the birth of the Dominion of Canada, and the rebirth of political autonomy in a colony known successively as Quebec, Lower Canada, Canada East, and once again Quebec in 1867. Following a general survey of the various constitutions enacted under British rule, this collection includes an equal number of commentaries by French- and English-speaking historians concerning each of the four constitutions to offer the most nuanced view of Canada’s origins to date.


zoom cover image
Posted by Mary Stokes at 9:37 AM No comments: