The Osgoode Society formally launched its 2103 books yesterday at a reception at Osgoode Hall in Toronto.

The first three were published earlier this year; Essays in the History of Canadian Law XI: Quebec and the Canadas edited by Donald Fyson and G. Blaine Baker has just appeared in print. I haven't had a chance to go through it yet, though I did get a chance to read Blaine Baker's survey of the legal historiography of the period/region in draft. It will be enormously useful. And please check out the dust jacket for an amusing period cartoon, courtesy of McGill University history professor emeritus Brian Young.  Perceptions of lawyer greed (and persistence therein) are a historical constant.

Here's the blurb (picture sadly not yet available, I will update when it is):

This latest volume in the Essays in the History of Canadian Law series, with which we launched our publishing programme in 1981, is the first devoted to central Canada - what is now Ontario and Quebec before Confederation. Anchored by a comprehensive introduction exploring the main themes of the legal history of the region, a group of distinguished historians have contributed 11 substantive essays (three in French), on subjects as varied as women in court, grand juries, western law and aboriginal peoples, gun use and control, Quebec legal literature, married women's property, and imprisonment for debt.

The other three books have already been announced here but here they are again. (Note:  join the Osgoode Society and receive this year's membership book and purchase any of this year's additional books here. 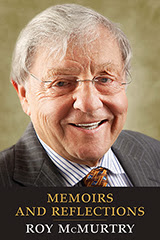 Our Members Book for 2013 is Memoirs and Reflections by the Hon. R. Roy McMurtry, published by the University of Toronto Press.  In addition to his most important accomplishment, the founding of the Osgoode Society, Roy McMurtry recounts and reflects on his years as a criminal defence lawyer, attorney-general of Ontario, High Commissioner to the UK, and Chief Justice of Ontario. Along the way we are given insights into the patriation of the Constitution, the end of apartheid in South Africa, the Dubin Inquiry, and many other events. This book is a great read, a modern legal history of Canada and Ontario, and a tale of a life well lived. 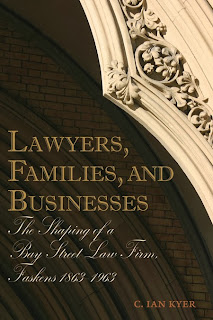 Lawyers, Families, and Businesses: The Shaping of a Bay Street Law Firm, Faskens 1863-1963, by C. Ian Kyer, Lawyer and  Historian, published by Irwin Law. Ian Kyer holds a Ph.D. in history and was for many years a partner at Fasken Martineau. He has combined  his historical and legal expertise to produce a comprehensive account of the first century of Faskens. He takes us through crucial stages in the development of not just this but many other Canadian law firms - alliances with business, the growth of two or three man partnerships into considerably larger firms, and the links between leading firms and politics. Along the way we see how law practice changed, how remuneration was divided up, how strong leaders stamped their individual personalities on the collective identity of the firm. This is a major contribution to our understanding of the seismic changes in Canadian law practice.

The Massey Murder: A Maid, her Master, and the Trial that Shocked a Nation, by Charlotte Gray, Independent Historian, published by Harper Collins. In 1915 Carrie Davies, an 18-year old servant girl in the home of Charles (Bert) Massey, scion of the famous Massey family, shot and killed her employer as he entered his house after work. Remarkably, she was acquitted, and award winning popular historian Charlotte Gray explains how this happened. Vividly recreating the war time atmosphere, a press war, and conflicts over crime and gender, she highlights the role played by the defence lawyer who exploited the "unwritten law" of an honour killing in a rare Canadian case of jury nullification.
Posted by Mary Stokes at 10:36 AM