To Right Historical Wrongs by Carmela Murdocca from UBC Press 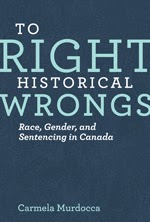 Following World War II, liberal nation-states sought to address injustices of the past. In keeping with trends in other countries, Canada's government began to consider its own implication in various past wrongs, and in the late twentieth century it began to implement reparative justice initiatives for historically marginalized people.
In 1996 the Canadian Criminal Code was amended with section 718.2(e), which instructs judges to consider reparative justice for Aboriginal offenders where possible. In 2012 a Supreme Court decision noted that no Aboriginal person should be sentenced without full consideration of the legacies of colonialism, displacement, and residential schools. Yet despite these efforts, there are more Indigenous and racialized people in Canadian prisons now than at any other time in history.
In To Right Historical Wrongs, Carmela Murdocca brings together the paradigm of reparative justice and the study of incarceration in an examination of this disconnect between political motivations for amending historical injustices and the vastly disproportionate reality of the penal system -- a troubling reality that is often ignored.
Drawing on detailed examination of legal cases, parliamentary debates, government reports, media commentary, and community sources, Murdocca presents a new perspective on discussions of culture-based sentencing in an age of both mass incarceration and historical amendment.