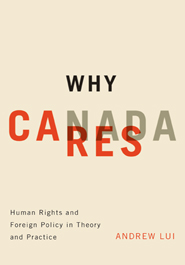 Why Canada Cares:
Human Rights and Foreign Policy in Theory and Practice by Andrew Lui includes a large dollop of legal history as part of the examination of Canadian human rights foreign policies.
Here's the publisher's blurb: