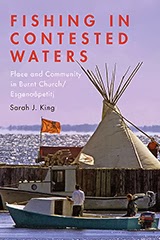 After the Supreme Court of Canada’s 1999 Marshall decision recognized Mi’kmaw fishers’ treaty right to fish, the fishers entered the inshore lobster fishery across Atlantic Canada. At Burnt Church/Esgenoôpetitj, New Brunswick, the Mi’kmaw fishery provoked violent confrontations with neighbours and the Canadian government. Over the next two years, boats, cottages, and a sacred grove were burned, people were shot at and beaten, boats rammed and sunk, roads barricaded, and the local wharf occupied.
Based on 12 months of ethnographic field work in Burnt Church/Esgenoôpetitj, Fishing in Contested Waters explores the origins of this dispute and the beliefs and experiences that motivated the locals involved in it. Weaving the perspectives of Native and non-Native people together, Sarah J. King examines the community as a contested place, simultaneously Mi’kmaw and Canadian. Drawing on philosophy and indigenous, environmental, and religious studies, Fishing in Contested Waters demonstrates the deep roots of contemporary conflicts over rights, sovereignty, conservation, and identity.
Posted by Mary Stokes at 1:29 PM