New from the Osgoode Society and UTP: Miller, Borderline Crimes: Fugitive Criminals and the Challenge of the Border, 1819-1914

The last of the Osgoode Society's three publications for 2016 is now in print.


Borderline Crime: Fugitive Criminals and the Challenge of the Border, 1819-1914 by Bradley Miller of the University of British Columbia, published by the Society in conjunction with the U of T Press, is one of two "member's books" for this year. (The other is Lori Chambers' A History of Adoption Law in Ontario, 1921-2015, about which I posted a few weeks ago.)

Here's what the Osgoode Society has to say about Borderline Crimes: 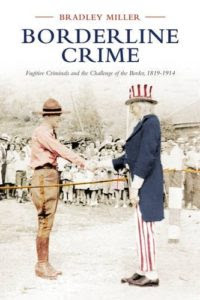 This is the first comprehensive history of cross-border Canadian-American interactions in relation to fugitive criminals, escaped slaves, and refugees. Miller examines the complexity of those interactions, which involved formal legal regimes governed by treaties as well as informal and extra-legal phenomena such as abductions and ground-level ‘customary’ co-operation between low-level officials. All of this is set against the background of a developing international law and evolving ideas about extradition in other parts of the British empire.
Posted by Mary Stokes at 10:48 AM