(Fairly Recent) Book of the Week 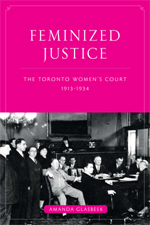 Although we are publishing this blog with the imprimatur of the Osgoode Society, we are well aware that Canadian Legal History does not begin and end with the Society. There are many excellent publishers and promoters of legal history out there, and one of them is the Law & Society series of the University of British Columbia Press, under the general supervision of legal historian Wes Pue.
One of the series' books from 2009 which deserves wide readership is Feminized Justice: The Toronto Women's Court, 1913-34  by York University socio-legal scholar, Canadian Law and Society Association board member and website manager (English) and all-round nice person Amanda Glasbeek.


In 1913, Toronto launched an experiment in feminist ideals: a woman’s police court. The court offered a separate venue to hear cases that involved women and became a forum where criminalized women and feminists met and struggled with the meaning of justice.

The court was run by and for women, but was it a great achievement? Amanda Glasbeek’s multifaceted portrait of the cases, defendants, and officials that graced its halls reveals a fundamental contradiction at the experiment’s core: the Toronto Women’s Police Court was both a site for feminist adaptations of justice and a court empowered to punish women.

Reconstructed from case files and newspaper accounts, this engrossing portrait of the trials and tribulations that accompanied an early experiment in feminized justice sheds new light on maternal feminist politics, women and crime, and the role of resistance, agency, and experience in the criminal justice system.