Angela Fernandez of the University of Toronto has drawn my attention to her recent review of Feminized Justice, the book by Amanda Glasbeek I profiled here last week, on Jotwell, the Journal of Things We Like (Lots.) The "We" is legal scholars: the online journal is designed to fill "a telling gap in legal scholarship by creating a space where legal academics will go to identify, celebrate, and discuss the best new legal scholarship."

One of the rubrics of legal scholarship Jotwell celebrates is legal history. Angela is a regular contributing editor for this section (and the only Canadian.)

Her review begins by highlighting the bright pink background on the book jacket in contrast with the somber black and white male-dominated photograph:

This terrific book, coloured hot pink, has a black-and-whiite photograph of the Toronto Women’s Court on its cover.  The photograph is filled with a lot of men, at least a dozen, all wearing suits, and only two women.  Where were the women lawyers, women judges, women clerks and bailiffs, not to mention the female defendants who occasioned the gathering of all this officialdom?  The court had a male judge for its first eight years.  The small number of women in the photograph and the initial lack of a female judge points to the same kind of contradiction Amanda Glasbeek’s book is most concerned to highlight, namely, the way that this movement to create a female-friendly space for the “right” kind of woman (young ones who had temporarily lost their moral compass and needed to be protected) ended up mostly coercing, disciplining, and punishing a very different kind of woman (e.g. older veterans with persistent drinking problems who were deemed effectively non-reformable).

I won't reproduce the rest of the review (you can follow the link to read it yourself), but here's an enlarged image of the cover again so you can see what she is talking about. 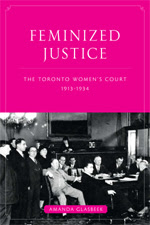