Freedom's Conditions in the Borderlands

One of the highlights of the CLSA conference last week in Frederiction for me was hearing and chatting with University of Calgary legal historian Lyndsay Campbell.


Lyndsay's paper on Oliver Dawsey, member of a gang of thugs who operated in the Hamilton-Dundas area in Canada West (yes, contrary to previous claims we had criminal gangs pre-confederation), was fascinating, (as were the other papers on her panel, the other legal history panel and random history papers on non-history panels.) I can't wait to hear more about this guy and his partners in crime.
Talking with her, I was surprised to hear that the collection of essays on the US-Canada border and borderlands she was editing with Tony Freyer had been published without setting off any of the alerts I have set up so that new Canadian legal history does not escape my notice. I guess the cyber-gremlins have not categorized this as Canadian, and (so far) the bloggers at the American Legal History Blog have not noticed it either. Maybe their cyber-gremlins are also confused.

The collection is called Freedom's Conditions in the U. S.- Canadian Borderlands in the Age of Emancipation  and is published by the the Carolina Academic Press. Here's how the publishers describe it. 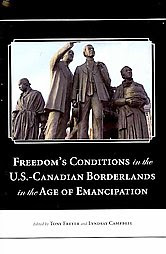 In Freedom's Conditions in the U.S.-Canadian Borderlands in the Age of Emancipation, American and Canadian legal historians explore the operation of race in the borderlands in the mid-nineteenth century. The contributors Tony Freyer, Lyndsay Campbell, Aviam Soifer, Gautham Rao, John Wertheimer, Stephen Middleton, and Bradley Miller examine the shadows that legal regimes cast upon each other, as people of African descent, and others, made decisions to move from one place to another in search of better, freer conditions under which to live, work, and raise their families. Legal institutions struggled with commitments to preserving states' rights to govern their own people, to popular sovereignty, to freedom of contract, to liberal ideals of equality and comity, and of course to white supremacy. Tensions ran high among different levels of government - federal-state-local in the United States and imperial-colonial-local in British North America. On the ground, practices of governance, such as policing and slave-catching, were unevenly professionalized: on both sides of the international border, low-level officials without much legal training and vested with considerable discretion were essential state actors. This collection is aimed at both American and Canadian readers interested in the histories of race, inter-state relations, and the development of legal institutions. The introduction and conclusion, by Freyer and Campbell, frame the essays and identify unifying themes and overlapping conclusions. As a whole, the essays in this collection make clear the hope that Canadian legal institutions offered to African Americans: formal equality, though in practice discrimination took place in the implementation of law, through racializing habits that affected exercises of discretion by various state officials. In the United States, the Fugitive Slave Act of 1850, combined with the influx of Irish immigrants in the late 1840s, provoked sharp, tense conflicts over the racialized governance of human mobility in the northern states, conflicts that, ironically, carved out a space for greater rights and autonomy for African Americans even as the fault lines in American federalism deepened. These essays also cast light on the fundamental instabilities in a legal system that accommodated slavery and explicitly entrenched white supremacy.

As well as collaborating on the Introduction and Conclusion, Lyndsay has contributed two chapters to the collection: "Governance in the Borderlands: Upper Canadian Legal Institutions" and "The Northern Borderlands: Canada West." Brad Miller's chapter is entitled "British Rights and Liberal Law in Canada's Fugitive Slave Debate, 1833-1843."

Full disclosure: Lyndsay offered to send me a comp copy, which offer I enthusiastically accepted. Presumably this was on account of my allowing her to use a couple of my yet-unpublished papers on local government in Canada West, and not because I said I planned to blog about the book.
Posted by Mary Stokes at 10:03 AM