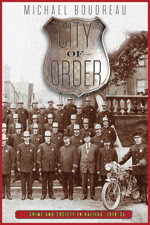 Interwar Halifax was a city in flux, a place where citizens struggled to adopt new ideas and technologies as they dealt with rising levels of poverty, unemployment, and outmigration. Although many Haligonians debated the pros and cons of the modern world, most agreed on one thing -- modernity was corrupting public morality and unleashing an imposing array of social problems, including crime, on their fair city.

Michael Boudreau pieces together from case files and archival records a riveting portrait of citizens, policy makers, and officials turning to the criminal justice system to create a bulwark against further social dislocation. Officials modernized the city’s machinery of order -- courts, prisons, and the police force -- and placed greater emphasis on crime control, while residents supported tough-on-crime measures and attached little importance to rehabilitation. These initiatives, in this particular cultural context, gave birth to a constructed vision of a criminal class that provided the police with convenient targets in their effort to build a city of order -- ethnic minorities, working-class men, and female and juvenile offenders.

This absorbing study of crime and culture in interwar Halifax shows how tough-on-crime measures can compound, rather than resolve, social inequalities and dislocations.