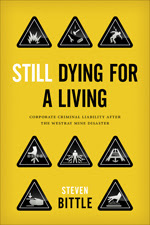 In 1992, a preventable explosion at the WestrayMine in Plymouth, Nova Scotia, killed twenty-six miners. More than a decade later, the government enacted Bill C-45, commonly known as the Westray bill, to hold organizations criminally liable for seriously injuring and killing workers and the public. Yet, while the federal government declared the Westray bill an important step, the law has thus far failed to produce a crackdown on corporate crime.

In Still Dying for a Living, Steven Bittle turns a critical eye on the Westray bill, revealing how legal, economic, and cultural discourses surrounding the bill downplayed
the seriousness of workplace injury and death, effectively characterizing these crimes as regrettable but largely unavoidable accidents and in the process obscuring their underlying causes